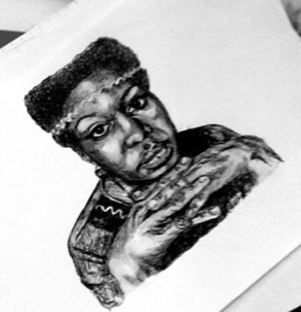 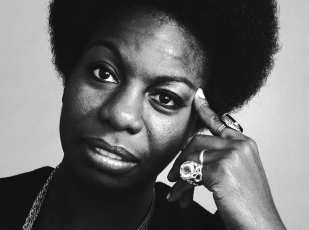 By now, you’ve probably heard JAY-Z’s “The Story of O. J.” (If not, go and listen to it. Now.) But while many will have heard this important song already, perhaps fewer people are instantly familiar with the sample running throughout the track, taken from the work of a different artistic genius: Nina Simone. An African-American singer-pianist and activist prominent in the 1960s, Simone was an earlier, more truly ground-breaking trailblazer in the development of a politicised African-American musical tradition, one in which women, over and above men, have frequently been at the forefront. Contemporary artists such as JAY-Z, then, have arguably merely followed the precedent set by earlier – and notably often female – pioneers, in transforming the stage into a platform from which their political statements could be projected. Indeed, throughout its history, African-American music, in its many varying and evolving forms, has been used in the struggle for freedom, and within this tradition, perhaps no woman has been more prominent than Nina Simone.

When one thinks of key feminist role models of the twentieth century, the mind most likely wouldn’t jump to Simone. On a popular level, she is more frequently thought of as a jazz or civil rights singer. Such a view would not be altogether mistaken; though Simone defied all conventional expectations and could never be fit neatly into the artificial restraints of one genre, she was the unmistakable voice of the black revolution. Partly, this lasting legacy of Simone as a race leader, rather than a feminist leader, was created by the popularity and longevity of some of her biggest hits, including “Mississippi Goddam” (1963) and “To Be Young, Gifted and Black” (1969).

Yet this enduring impression of Simone within popular imagination is also attributable to other, wider issues, as well as to Simone herself. In her autobiography, Simone stated ‘I never thought of myself as part of women’s liberation because I felt my needs were the same as any woman’s, and the questions the female radicals were asking had no relevance to me’. Simone, like many women of colour in America in the late 1960s, frequently felt alienated by the (largely white) Women’s Liberation movement, which, for many, did not seem to address their concerns or acknowledge their experiences. Unable to find a place for themselves in a women’s movement which frequently either privileged gender concerns to the total neglect of race, or else conformed to racist attitudes and practices, many black women had thus historically prioritised their race over their gender. On the whole, Simone was no exception. Regarding gender issues, she wrote, ‘It wasn’t something I sang about a lot because the black struggle was my priority, but I knew if I tried I could compose a love song to take the scab off the terrible sore to do with the relationship between black men and women.’

While Simone therefore may have prioritised the black struggle, she recognised that the problems plaguing black women did not stem from racism alone, but that they were oppressed by the ‘double burden’ of race and gender. Not only did black women face racism from whites, they were also confronted with the sexism of black men, being largely excluded and marginalised by both the white-dominated women’s movement, and the male-dominated civil rights movement. Seeing that their oppression came from both sources, Simone recognised that ‘along with everything else there had to be changes in the way we [black women] saw ourselves and in how men saw us.’ Ultimately, black women needed to carve a space out for themselves, and Simone undertook a leading role in empowering women to do so. Her artistic contributions reached beyond race matters alone, and certain of her songs became some of the most prominent and powerful expressions of an intersectional feminism within American popular culture. Although she addressed themes of gender in several songs, including “Mississippi Goddam”, “Go Limp” and “Pirate Jenny”, two songs stand out as her most direct expressions of black feminism: “Four Women” and “Images”.

It is the former, released in 1964, that provides the sample to “The Story of O.J.”. “Four Women” was a watershed moment in Simone’s career, as the first song in which she addressed so frankly the problems confronting women of colour. Composed of four verses, the song told the story of four black women, of whom Simone wrote, ‘their skin tones range from light to dark and their ideas of beauty and their own importance are deeply influenced by that.’ Of the song, she added, ‘all the song did was to tell what entered into the minds of most black women in America when they thought about themselves: their complexions, their hair… and what other women thought of them.’ But the main point the song made, according to Simone, was that ‘Black women didn’t know what the hell they wanted because they were defined by things they didn’t control, and until they had the confidence to define themselves they’d be stuck in the same mess forever.’ 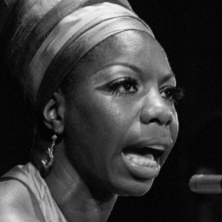 What the song did, then, was to address and expose black women’s lack of control over the things that defined them, thereby increasing their consciousness and their confidence to reject these limitations, and take back control. It did so largely by addressing not only the limited terms by which black women were being defined, but also by exposing the key dominant stereotypes used to oppress them. Each woman in the song thus represented an archetype or stereotype of her era. The first, ‘Aunt Sarah’, represented the painful ‘Mammy’ stereotype; a supposedly loyal and devoted servant, who was docile, maternal, asexual and unfeminine (M. Harris-Perry, 2011). The second, ‘Saffronia’, was a mixed-race woman, whose very existence evinced a long and sordid history of the rape of black women by white men. The third, ‘Sweet Thing’, was a young prostitute, who not only represented the demeaning ‘Jezebel’ stereotype of the hypersexualised black woman, but whose verse also provided a biting critique of the sexual and economic exploitation of black women. Her story reflected the painful and desperate situation of many economically disempowered women, who found their bodies to be the only economic asset at their disposal.

Through these three women, Simone exposed the dilemma that black women in America faced: that they were not, and ultimately had never been, in control over their own lives, bodies, sexualities or portrayals. Sweet Thing’s apparent sexual availability, so at odds with Mammy’s supposed asexuality, (yet tragically echoing Saffronia’s mother’s ultimate powerlessness over her own body) revealed the extent to which black women lacked control and had been defined by others in contradicting terms. The Jezebel stereotype, for example, was part of the ‘myth of promiscuity’. Historically created and perpetuated by white social, political and economic institutions, this painted black women as particularly promiscuous and sexually immoral, and was used to justify the brutality of Southern white men and maintain the profitable exploitation of slave society.

Simone, enraged by the historical, social, political and economic situation of black women, was most like ‘Peaches’, the last narrator, whose raging, shouting verse brought the song to its dramatic climax. Peaches reflected the ‘angry black woman’ stereotype, but importantly, this anger was justified, righteous, and loudly, unapologetically proclaimed. By using her powerful voice on stage to declare this fury, Simone broadcast it to the world, gave voice to millions of black women’s anger, and helped reclaim not only their power, but also their entitlement to that power.

A second major theme of Simone’s gendered work, closely linked to the first, was the internalisation of racial self-hatred. This was one of the many tragic consequences of the aforementioned stereotypes and persistent racist onslaught, and was something to which Simone was not immune, but which she was determined to fight. On looking in the mirror, she wrote: ‘I saw two faces, knowing that on the one hand I loved being black and being a woman, and that on the other it was my colour and sex which had fucked me up in the first place.’ “Four Women” thus also addressed these problems, bringing critical commentary to black vulnerability to white standards of beauty. Ebony Magazine stated the song struck a deep note with black women, for ‘never had anyone expressed so eloquently and so openly that which had been their burden for centuries: a rejection of their own blackness, reinforced by the “fair-skinned, blue-eyed blonde” standards of the larger society.’[1]

“Images” (1964) also addressed this theme. The song’s lyrics were taken from William Waring Cuney’s Harlem Renaissance poem, ‘No Images’, which told the story of a beautiful African-American woman who feels ugly in America. The song blamed the racial situation in the U.S. for her inability to recognise her beauty and love herself, making the point that she would realise her true beauty if she were given the chance to return to her ancestors’ surroundings. In this way, the song linked the woman’s beauty directly to her African roots, showing that she was beautiful because of her links to Africa, not in spite of them.

This idea was not only a theme of Simone’s songs; it was also a strongly-held conviction 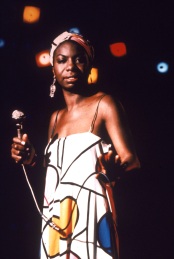 by which she lived, as well as something she expressed through her own fashion and styling. With ‘black is beautiful’ and ‘black pride’ becoming integral parts of her ‘Black Power’ ethos, Simone was one of the earliest black American celebrities to wear her hair natural and don African-style clothing such as dashikis. In an interview, she stated that ‘we are the most beautiful creatures in the whole world, black people’, and that part of her job was therefore to make black people ‘more curious about where they came from, and their own identity and pride in that identity’. In her words, her message was ‘If I am black and beautiful, I really am and I know it and I don’t care who cares or says what’. This, she stated was what compelled her to ‘push black people to identify with black culture. Giving out to them that black-ness, that black power.’

It was thus through the gendered aspects of Simone’s largely racial work that she created early black power perspectives which insisted on the centrality of female power. Unlike later, masculinist Black Power rhetoric of the late 1960s, hers was free of misogyny, did not devalue women, and claimed black women’s experiences as relevant. Her songs therefore served as poignant manifestos of black feminist thought, transfiguring Simone into a key intersectional feminist leader.

When she spoke out, she gave voice to countless muted voices who had been silenced and suppressed, and when she sang, these voices, thus empowered, sang with her.

1 thought on “My Name is Peaches: The Story of Nina Simone”