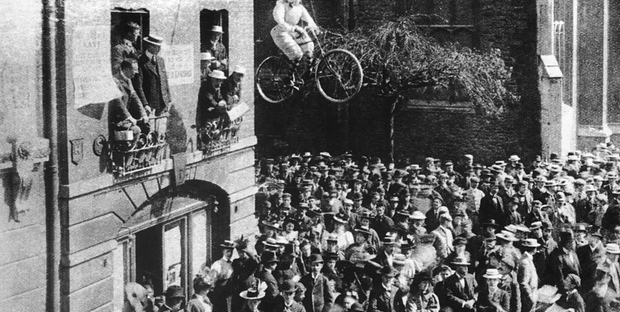 Ellen Pasternack talks to Jane Robinson about her book, Bluestockings: A Remarkable History of the First Women to Fight for an Education.

Jane Robinson’s  Bluestockings paints a story of small victories, of a series of women who each managed to get her foot in the door and leave it open a little wider for those who came after her. With every precedent, educating women became more normalised and accepted. A particularly touching image in Bluestockings compares women’s education to an orchard tended by each generation for the benefit of the next: ‘Like pioneer homesteaders in far-flung corners of empire, these early bluestockings husbanded the fruits of their labour for the benefit of future generations.’

Many at the time viewed women’s education as a dangerous experiment, and thought that when it failed, as it was certain to do, this madness would end. Women would return to the domestic sphere, and life would continue as normal. This necessitated what Jane called a ‘game of grandmother’s footsteps’, where advances had to be made as softly and unobtrusively as possible. Say the wrong thing, cause too much disturbance, and the experiment would be over.

I was eager to ask Jane, who is currently working on a book on the suffragist movement, whether university education for women had any influence on the concurrent fight for women’s suffrage. Education strengthened the case for women’s suffrage, by giving women confidence and providing official recognition of their intellectual capabilities. However, many figures in the fight for women’s education in fact made efforts to distance themselves from the suffrage movement. ‘In the early days, it was crucial that the two campaigns were kept entirely separate’, Jane explains. ‘The suffragettes were looked upon as hysterical extremists, and any woman campaigning for anything risked being tarred with the same brush.’

The university experience of these first women was very different from that which we would recognise today. In Victorian times, individuals were not legally adults until the age of 21, meaning that colleges acted in loco parentis for the majority of the affectionately named ‘undergraduettes’. As a result, they were subject to a dizzying assortment of regulations, including dress codes, curfews, the need for official permission for every social excursion, and most alien of all to the modern reader, chaperones, by whom female students had to be accompanied every time they stepped outside college grounds. Jane told me that, perhaps surprisingly, the students generally abided by these rules in good humour: turn of the century women would gratefully accept any arrangement which allowed them to attend university, and they weren’t about to quibble over details like the permitted length of their skirts.

The first women to fight for an education faced a strong backlash on many fronts. For a long time, the dominant opinion of the general public was that educating women was risible, dangerous, or both. Once at university, women faced suspicion and boorish behaviour from their male peers. A vote at Cambridge in 1897 on whether to allow women official membership of the university prompted some extremely ugly rioting from male students. Effigies of prominent feminists were burned, and projectiles lobbed at anyone suspected of harbouring bluestocking sympathies. The streets presented enough of a danger that female students were kept in colleges for their own safety. The motion was rejected, and Cambridge denied its women students degrees until 1948.

Tutors were sometimes no better- in Bluestockings, Jane Robinson compares the academic establishment’s frequent displays of misogynistic derision to the activities of ‘a respectable-looking flasher’. A student magazine at Manchester University in 1902 describes the reaction of a professor to finding only female students present one day: ‘With head erect and eyes riveted on the opposite wall, he announced, “As there is nobody here, I shall not lecture today”, and with stately dignity made his departure.’  Jane’s view is that the overwhelmingly male student body at universities felt threatened and undermined by what they perceived as a ‘feminine invasion’, and as for the lecturers, ‘it was completely beyond them to imagine why women would want to go to university, and it was a waste of places that would otherwise go to men.’ This view, that women’s education is an indulgent preamble to a life of domestic responsibility, is one that I believe remains extremely pervasive to this day. Our current Foreign Secretary, for instance, remarked in 2013 that the number of female university students was increasing because ‘they’ve got to find men to marry’. Similarly, a mere glance at the discrimination faced by women in the workplace is enough to convince me that the majority of people today believe to some conscious or subconscious degree that career opportunities are wasted on women when they could otherwise be awarded to men.

This was not the only objection that was cited to women’s education. Many people felt uncomfortable with the idea, considering it improper and unladylike; in other words, they wanted to keep women stupid so that they could retain their submissive underclass of breeders. Another major objection was that education was too much mental exertion for young women, and that it would therefore leave them infertile. A closely related school of thought was that any form of exertion during menstruation would shrivel a woman’s ovaries, again- quel horreur!– leaving her sterile. The seemingly obvious solution that women be permitted to learn for three weeks out of four was not entertained; instead it was argued that they should be barred from education altogether.

While such statements may sound amusingly antiquated to modern ears, let us not forget that menstruation is still seen as something that makes women a liability, and that there is still a mind-boggling level of public ignorance surrounding women’s bodies. Case in point, it was suggested by many in the run up to the 2016 election that Hillary Clinton should not be POTUS lest she start a war in a fit of menstrual rage. (Other obvious criticisms aside, Clinton is 69).

However, Jane was very keen to point out that although it is easy to get the impression the world was uniformly hostile to women’s education, this was not always the case. ‘Academics were polarised- there were some who were in complete denial, but others who were very supportive, and this support was invaluable.’ One touching example of support Jane found was the gifts sent in to women’s colleges from well-wishers. A huge variety of items were received, including vegetable seeds, hat ribbons, and paintings to be hung in common rooms. These thoughtful donations, intended as morale-boosters for the trailblazers of women’s education, demonstrate a genuine enthusiasm from many members of the public.

At Oxford University, where portraits and busts of long-dead men stare down disapprovingly from every alcove, it can be easy to feel as though one does not belong. It was heartening therefore to learn in Bluestockings that, although women are largely absent from the university’s official history, women at Oxford have their own alternative history dating back over a century. All too often, women’s stories are forgotten, and it is therefore up to us to rediscover our roots and bring their contributions to light. We at Bluestocking are proud to continue this work.