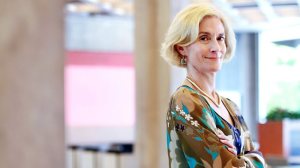 American Philosopher Martha Nussbaum is the current Ernst Freund Distinguished Service Professor of Law and Ethics, appointed in the Law School and the Philosophy Department at the University of Chicago.  She has previously taught at Harvard, Brown and Oxford. She has also chaired the Committee on the Status of Women, and the Committee for Public Philosophy in the American Philosophical Association, of which she is a Past President. Amongst her numerous formal achievements are the Brandeis Creative Arts Award in Non-Fiction, the PEN Spielvogel-Diamondstein Award, the Prince of Asturias Award in Social Science, and the Grawemeyer Award in Education.

Her publications include The Fragility of Goodness: Luck and Ethics in Greek Tragedy and Philosophy (1986), Sex and Social Justice (1999), Women and Human Development: The Capabilities Approach (2000), and From Disgust to Humanity: Sexual Orientation and Constitutional Law (2010).

In 2014 she delivered the prestigious John Locke Lectures in Philosophy at Oxford University.

Before entering the academy, were you aware that you would encounter so much sexual discrimination and, if so, did this ever make you reconsider your commitment to it?

I went to a wonderful all-women’s school that prepared us for a lot of struggle in the world outside, as indeed did my father, who strongly encouraged my career. So I was well prepared. I also got some very strong support from men in the profession, including Bernard Williams, Hilary Putnam, and Stanley Cavell, all of whom were real feminists. Also, I came along at the right time, when doors were opening: I was the first woman to win the Junior Fellowship in Harvard’s Society of Fellows, in the first year when that award was open to women. The only time I diverged from my career plan was much earlier, when I was briefly a professional actress. But the life of the academy suited me much better, and I love it.

Undergraduate English Literature courses often still demonstrate a female majority and yet the academic world still seems to be androcentric; why do you think this is still the case and how can we secure tangible change?

Literature departments in the US have a very strong female presence, as do Classics departments. Philosophy is the outlier in the humanities. The American Philosophical Association has studied the problem, and what we find is that women tend to drop out between the introductory course and the choice of a major (of course this is the US system, where you choose your major subject after two years of liberal arts courses). It is difficult to know why this is so, but one hypothesis is that intro courses don’t assign many readings by female authors (particularly if they are historically organized), so women conclude that the field is not for them. There have been notorious cases of sexual harassment in philosophy recently, but that would not explain the drop-off prior to the choice of an undergraduate major, since the harassment was between professors and graduate students.

Anger is a big theme in your current work; how do you feel towards those professors who mistreated you and other women in the past? Do you feel like you were at least able to take away any valuable lessons?

I think that most men are decent and want to do the right thing, and a lot of the bad behavior I encountered was sheer cluelessness. This sort of bad behavior can be deterred by good policies, in areas such as child care, maternity leave, and sexual harassment. There will always be disturbed people who seek power by inflicting damage on others. But I think I really feel sorry for such people, because they are typically very self-destructive.   It is important, however, that their wrongful conduct be brought to light and that they be prevented from doing such things.

As for the specific people who discriminated against me, their bad behavior is in the past not the future. When I got a tenured offer at Harvard in 2008, after being turned down for tenure there in 1983, men there (including two who had discriminated against me) said to me, “Now justice is being done.” That thought briefly appealed to me. But then I soon thought: that is about the past, and what I have to think about is the future. And in the future, I did not want to be at Harvard, because it was much less appealing than Chicago, where I already was. To have gone there for the sake of the past would have been stupid.

You have said that your silence about the presence of sexual harassment in the academy was wrong and that your associate who spoke out was ultimately in the right. But (particularly in light of your abstention from radical feminist groups) do you think that vociferous feminist movements – in today’s world – can be detrimental to advancing women’s rights and equality?

I’m not sure what you mean by my “abstention from radical feminist groups”: I guess you are talking about the time when I was in graduate school. The reason for my non-participation was partly my lack of sympathy with Marxism, which those groups then were; it was also because I was busy raising a small child. I have a great deal of admiration and sympathy for the radical feminism of Catharine MacKinnon and Andrea Dworkin, and have expressed that sympathy in my writing. MacKinnon is a friend, and I think she is a terrific figure, although I disagree with her about some important things.

Do you believe that the components of your capabilities approach such as emotions may apply differently to men and women?

In discussing the relationship between individuals and the state, you say that Aeschylus’s audience was passionate about democratic political structures. Still considering classical Greek tragedy, how do you think the conflict between the spheres of ‘oikos’ (household) and ‘polis’ (state) may resonate for women today?

I think the most tenacious problems for professional women today are not those in the academy, they are the problems surrounding the division of domestic labor, child care, and elder care in the home. Many men remain unwilling to be equal partners in these activities, and they assume women will do them out of love. This puts enormous pressure on women. So the conflict between the oikos and the outer world is very much alive, unfortunately. To fix it requires good governmental policies (family and medical leave, for example), good workplace policies (ample parental leave, for example, and flexible working hours), but it also requires men to understand their role in a richer way. This is hard.

Which women in particular have influenced your thinking (both intellectual and otherwise)?

My mother; my high school teachers, especially Lois Goutman, Marthe Melchior, and Marion Stearns; in philosophy, Iris Murdoch (whom I knew slightly, but mostly she influenced me through writing); in classics, the wonderful scholar Miriam Griffin (of Somerville College), who is a good friend; Ines Scalise, a fashion expert at Ikram in Chicago, who influences my thinking about clothes; my superb singing teacher Tambra Black, who has made such a large difference to my abilities and added joy to my whole life. Then we might mention the fictional women I impersonate when I sing arias, who certainly shape my life, actress that I am: Vitellia, The Marschallin, Magda (in Menotti’s The Consul), Turandot, Cleopatra. Obviously I don’t exactly identify with all of those women, but I discover something about myself and extend my emotional range by exploring them. The fact that I have just done my best singing ever as Turandot, who is not an entirely pleasant character, is interesting. I am going to try Leonora next, to explore someone a bit nicer! (But I also have my eye on Salome.)

If you had to give one sentence of advice to your future self, what would it be?