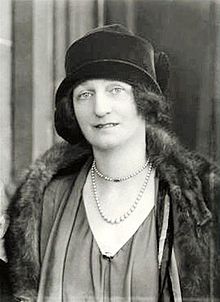 When philanthropist, society hostess and international celebrity Muriel Paget died in 1938, her Times obituary described her as ‘the second lady of the lamp’.[1] It was a purposive label, calling to mind another philanthropist and more famous lady of the lamp, Florence Nightingale. In the first instance the comparison was justified at the level of the geography of these women’s work: during the mid- 1850s Nightingale worked in the Crimean, and Paget similarly claimed her fields of operation in Russia and the emerging Baltic States after 1917. In the second instance, though, an even greater link between the two women was forged in the public consciousness by their embodiment of the figure of care-giver, an image that reflected and refracted their association with war. Nightingale, of course, was famed for her contribution to mid-nineteenth-century nursing reform, whilst in 1930 the woman’s magazine Britannia and Eve cast Paget as a ‘heroine’ of the First World War, describing her as one of England’s ‘venturesome nursing spirits’.[2] In this short article I dig beneath the surface image of the ‘lady of the lamp’ to ask what public representations of Muriel Paget reveal about how interwar Britons understood the juxtaposition of gender, philanthropic models of care, and conflict.

Muriel Paget (1876-1938) was born in London to a socially-conscious aristocratic family.[3] From May 1897 to 1938 she lived in Somerset with her husband, the barrister and scientific investigator Sir Richard Paget and their five children. After spending her early married life as a society hostess, mother and in domestic charitable work, in 1916 she went to St. Petersburg as a volunteer with the Anglo-Russian Hospital, a venture that marked the beginning of her philanthropic career in health, welfare and relief work in Russia and Eastern Europe. Paget was amongst a generation of women for whom the First World War marked a concrete shift in the spaces (and often degree) of their charitable work, but who continued to be motivated in their philanthropy by long-established ideas of compassion and care.[4] Tensions between these old and new agendas, like those surrounding open identification of women with war, did exist. But these tensions themselves brought creative opportunities for a philanthropic woman like Paget to claim cultural authority upon a varied cultural and political terrain.

On 3 September 1932 the Consul General in Moscow, Reader Bullard, recorded a diary entry about Paget’s work for the Distressed British Subjects Fund, a charity she had founded in 1924 to support a group of British nationals who were marooned in Soviet Russia. The entry portrayed Paget as a Lady Bountiful, asking for onions to be pulled up in the garden of the British Embassy (where her charity had its headquarters) so that she could present them to her clients when they came to receive their monthly pensions.[5] Bullard’s stereotyping of Paget represented the conservative view of the interwar British diplomatic establishment. In part, it can be attributed to women’s limited formal input in diplomatic activity during these years, as Helen McCarthy has discussed.[6] Yet Paget was actually adept at acquiring support for her philanthropic enterprises from various national elites, forging close alliances with the President of Czechoslovakia, Thomas Masaryk, for example. Paget’s daughter Sylvia picked up on her mother’s skills in negotiation, joking from Shanghai during debates about the Russian-Sino-Japanese relationship in the spring of 1933 that she ‘had better come out here as Britain’s first woman Ambassador!’[7] By early 1937 the sense that Paget was ‘almost ambassadorial’ had filtered into the British establishment press, in a Sunday Times feature on an imagined dinner party hosted by the Pagets.[8] The Sunday Times article emphasised Paget in a (fictive) domestic role that Reader Bullard had denigrated, which fitted neatly with genteel models of sociability rather than internationalist organisational standards. Women’s benevolence, it seemed, could bring a different dimension to established understandings of statecraft.

Clothing and physical appearance provided an immediate means through which a woman like Paget could advertise an agenda that complicated professional political motifs. Publicity for her played up this strategy within a framework that drew out her overtly feminine qualities. In September 1933 the fashionable magazine Tatler described Paget’s ‘big blue eyes’, ‘gentle manner’ and ‘soft voice’, commenting that ‘anyone meeting her for the first time finds it hard to realise the iron will which gets things done’.[9] Complementing this, publicity photographs which typically featured Paget in a military-style uniform could be softened (and strategically gendered female) by a well-placed posy of flowers, as in a photograph in an article about her children’s hospital in Bytca, Slovakia in March 1921 in the photojournalist magazine, Česky Svět (Czech World). These examples point to an attempt amongst publicists to visualise Paget’s mediation of a competency usually associated with the ‘expert’ alongside gendered images of women’s cultural authority. Holding together these different social codes meant Paget could also relate in different ways to different constituencies, an act that was often achieved via the underlying political inflections of her appearance. As writer Una Pope-Hennessy observed during her visit to Russia in the summer and autumn of 1937, Paget was deeply emotionally engaged with her British visitors, demonstrated in her stylish, demure outfits and ‘benedictory smile’, while markedly cold in her demeanour (like ‘the Iron Duke’) towards her staff, wearing a tailored nurse’s uniform which betokened the utmost professionalism.[11]

Finding ways of communicating the philanthropic message was another vital strand in successfully moving between different modes of cultural authority and, as with her dress, Paget’s formula depended upon her audience. When she spoke to the American women’s group in London in 1931 about her work in establishing feeding centres for children in Russia and Eastern Europe, she focused her discussion of the Russian government’s Five Year Plan around the issue of the state-imposed diets, as an appeal to an empathetic response towards issues of nutrition and welfare which women were assumed to give.[12] By contrast, her lectures at the Imperial Defence College (1929) and Chatham House (1930) required different tactics. Descriptive rather than obviously persuasive, as her talks to women groups were, Paget’s talks at these military and diplomatic centres were grounded in factual discussions about Russian society and economy and pivoted on her expert knowledge of politics on the ground. However, in relating her work to these (predominantly male) audiences, Paget actually found a way of challenging the official standards of elite military men to promote ‘personal relations with the Soviet Government’, an idea which drew the talk back both to her own diplomatic skills and achievements, and to the inter-personal methods of philanthropy that she applied.[13] Breaking down the boundaries between formal and informal paths to influence was a central motif of Muriel Paget’s social work and, as with many other contemporary female social activists (from politicians to education reformers), was pivotal to her claims to cultural authority. Paget’s work showed that professional standards were neither the only way to negotiate conflict or politics, nor the most culturally meaningful for women, for whom gendered images of competency and attractiveness remained central to winning public confidence. In sewing together these various threads, she was continuing a tradition of female philanthropy that had been established by well-known predecessors not the least, Florence Nightingale; receiving the light of their wisdom, which she in turn hoped to pass on.

[3] She was the daughter of the twelfth early of Winchilsea, MP for Lincolnshire South and Spalding in the 1880s and a champion of the agricultural labourer, and his wife, Edith. They were committed Anglicans.

[4] Several historians have noted the outpouring of female voluntary effort during the war. See e.g. Gail Braybon and Penny Summerfield, Out of the Cage:  Women’s Experiences in the Two World Wars (London: Pandora, 1987), Susan Grayzel, Women’s Identities at War:  Gender, Motherhood, and Politics in Britain and France During the First World War.  (Chapel Hill:  University of North Carolina Press, 1999), Nicoletta F. Gullace, “The Blood of Our Sons”:  Men, Women, and the Renegotiation of British Citizenship During the Great War (New York and Houndsmills:  Palgrave Macmillan, 2002).

[11] Pope-Hennessy, Closed city, pp. 43-4. Hennessy made the trip to Russia as one of the final group of European tourists accompanied by the travel company Intourist.