During the eighteenth century, thanks to the establishment of the post office in 1660, a rise in literacy, and an ascendant ‘middle class’, letter-writing became an increasingly common pastime for men and women. The letter became a form both of private communication and of public expression, in which women were expected not only to participate but to excel. The distinction between public and private, however, was seldom straightforward, and gave rise to concerns over the propriety of women’s letter-writing. The treatment of women’s letters in eighteenth-century fiction, about one-fifth of which was epistolary, both celebrates the female friendships forged – and intellectual freedom found – in letter-writing, and demonstrates fear of the potential independence, and even secrecy, provided by the medium. Testament to literature’s and societys hesitancy in embracing women’s letter-writing is the fact that the most popular letters of the period were those of the female character Clarissa Harlowe, who was herself the fictional creation of the male novelist Samuel Richardson.

“Her Claim to Sense and Meaning”

During the rise of letter-writing, a tension grew between two trajectories of development: letter-writing conventions became less formal, with their subject-matter including private as well as public matters, and letters were becoming an artistic, moral and intellectual literary form, and an accomplishment to be shown off. Richardson’s fictional heroines are repeatedly praised for their talents in letter-writing, and it seems to be an insult to a host if a lady refuses to read her own correspondence in the same way she might demonstrate her ability on the pianoforte. But, as Richardson wrote to one of his female correspondents, Sophia Westcomb, in 1746, letter-writing was not only a superficial social talent:

‘the Pen is almost the only Means a very modest and diffident Lady (who in Company will not attempt to glare) has to shew herself, and that she has a Mind. … her Closet her Paradise … there she can distinguish Her Self: By this means she can assert and vindicate her Claim to Sense and Meaning.’ (Selected Letters of Samuel Richardson)

Women such as Lady Mary Wortley Montagu used letter-writing to assert their intelligence and enter the public sphere. Montagu’s Letters from Turkey, written between 1716 and 1718 and published in 1762, were influential both as models of epistolary style and as anthropological works. Several women published letters outlining political or moral arguments; Mary Masters’ ‘Familiar Letters’ (1755) discussed women’s education and domestic abuse, and Hester Chapone published her ‘Letters on the Improvement of the Mind’ in 1773. She and Elizabeth Carter, whose letters to Catherine Talbot were published in 1809, are referred to by Elizabeth Gaskell in ‘Cranford’ as epistolary models. Evidently, the implication of Richardson’s correspon dence is that the letter itself is crucial in a society where women are expected to be ‘modest and diffident’ and to shy away from expressing themselves “in Company”.

The letter certainly allowed one woman a voice: separated from her husband, Sarah Pennington’s only means of contacting her daughters was through a public letter addressed to them, published in 1761. She writes to them that “The public is noway concerned in family-affairs, nor ought to be made a party in them; but my circumstances are such as lay me under a necessity of either communicating my sentiments to the world, or concealing them from you.” Thus the letter was not only a medium for intellectual or ethical discourse, but for maintaining or constructing female relationships, whether in private or, in this unusual case, public. 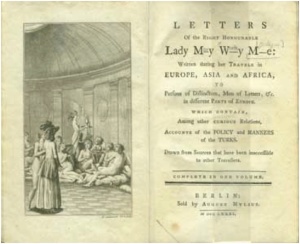 The letter as a tool for women to communicate with one another is also demonstrated in Richardson’s Clarissa, in which the most sustained, ‘uninterrupted friendship’ – along with most of the letters – is between Clarissa and her confidante Anna Howe. When Anna’s mother tries to prevent their correspondence, Anna argues that there can be no objection to or danger in her writing to another woman as ‘the devilish sex [is] not in the question.’ Nevertheless these letters between women are not free from suspicion, and the novels demonstrate an uncertainty as to whether women’s letters ought to be public or private; as with Sarah Pennington’s daughters, young ladies’ guardians expect to be given access to the ladies’ letters or even to withhold them, but to steal or read a letter without permission is deemed a violation. Both Pamela and Clarissa, the titular heroines of Richardson’s first two novels, embark in secret correspondence, while Harriet, the heroine of his third and final novel Sir Charles Grandison, knows that her letters to her cousin will be read aloud to the family, so marks out with square brackets the passages which she wants her primary recipient to keep quiet.

Neither Richardson nor his novels offer a straightforward solution to this apparent discrepancy: his heroines’ letters are both paradigms, worthy in terms of style and virtuous content for publication, and profoundly private spaces for his female characters. Nor is Richardson in any way a straightforward proto-feminist: although he supports the independence to be found in letter-writing, he does not encourage independence from parental or spousal authority, and the ideal letter from an ideal correspondent like Clarissa still, for Richardson, embodies patriarchal values.

It is perhaps symptomatic of this hesitancy that so many female novelists of the eighteenth century chose to write in the epistolary form; they could pose as an editor rather than author, as Richardson did, or at least avoid the direct authorial voice. Writing novels was, after all, more morally suspect than writing non-fiction epistles on morality or even politics. Nevertheless several of the major female novelists of the period began with the epistolary form, eventually abandoning it as they gained confidence in their own voices. Towards the end of the eighteenth century, Fanny Burney abandoned for her subsequent novels the epistolary form of her first novel Evelina and, most famously, Jane Austen dabbled with the form in her short story Lady Susan, only to find a more satisfying medium in the omniscient authorial narrative.

The rise in letter-writing and in women’s writing in the eighteenth century are inextricably connected. In its private capacity, the letter allowed a woman confined to the home to communicate outside the home with both men and women, while in the form of published letters it was a valuable platform from which publicly to assert women’s intellectual capabilities. Of course, the eighteenth century did not wholeheartedly embrace the potential of such a development; both kinds of letters aroused contemporary criticism, but it was the suspicion aroused by private, domestic letters which inspired novels of the period, exploiting as they do the potential scandals and secrets in letters, even while making use of the generally-accepted propriety of letter-writing. Come nineteenth-century, women did not stop writing letters, but the epistolary novel plummeted in popularity, as male and female writers were finding more freedom in their own authorial voices. But in their heyday, letters public and private, real and fictional, played a crucial part in the development of women’s writing.