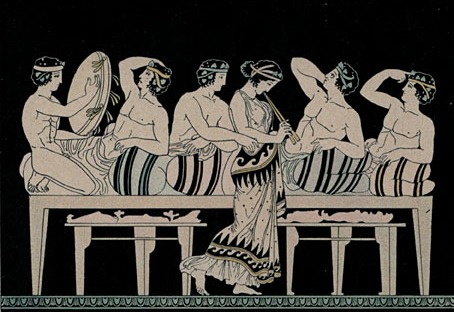 The Greek world in the last quarter of the fifth century BC was dominated by the Peloponnesian War (431-404), waged between Athens and Sparta, arguably the two most powerful city-states of the day. The literary sources documenting the war are, perhaps unsurprisingly, entirely androcentric. Women are all but absent from Thucydides’ account; when they are mentioned, in the Pseudo-Periklean funeral oration, a passive and entirely uninteresting role is envisaged: Perikles states that ‘womanly virtue’ (???a??e?a ??et?) is achieved by ‘not being weaker than is natural for the female sex’, and not being talked about among men for neither good or ill reason.

It is therefore surprising and inspiring to find an example of female co-operation in a famous play dating to the middle of this period. The Lysistrata, arguably the most popular work of the Athenian comic playwright Aristophanes, was produced in 411, not long after the Athenian war effort had been dealt a crippling blow by the failure of the Sicilian Expedition, a two-year naval endeavour which cost the city six thousand men, two hundred warships, and the support of many former allies. It was widely assumed that, by this time, the Athenians were engaged in a war that they could only lose. Aristophanes’ Lysistrata, depicts the women of Athens, Sparta, and several other Greek cities, uniting, occupying the Athenian akropolis, and engaging in a sex-strike, in an attempt to force the men into abandoning hostilities and making peace. The women, led by an Athenian by the name of Lysistrata (literally ‘the disbander of armies’), come to both verbal and physical blows with (male) civic officials and ambassadors of the warring cities, but eventually succeed in achieving their aim.

Lysistrata, an imposing and serious woman, is different from the women she rallies, who are presented as initially very unwilling to abandon sexual activity. It has been suggested that the character of Lysistrata is a representation of the priestess of Athena Polias (the most senior religious official in Athens), whose name was Lysimache (‘the dispeller of battle’). This is not impossible, since she is given audience by given that the various male officials, which we would not expect for a woman of a lesser station.

When challenged by an Athenian magistrate who attempts to convince her to leave the akropolis and make the women abandon their strike, Lysistrata employs an interesting metaphor to explain her proposed solution to the citys problems. She compares the city’s political situation to a skein of wool that has become tangled with war and other blunders; she advises cleaning it, picking off the parasites (war-mongers), and putting all the clean wool into one basket. Lysistrata encourages unity and equality through enfranchising allies and foreigners as friends and citizens, and claims that, if everyone pulls together and works for a common good, a ‘strong cloak for the people’ (µe???? ??a??a t? d?µ?) will be produced.

Fifth-century Greek women are presented throughout literature as fulfilling one of two roles: wealthier women took religious offices, while those less fortunate engaged in domestic activities, including household accountancy. It is unlikely, however, that the two would overlap: priestesses, for example, would not be found mending clothes or buying olive oil, as they would have had a large number of servants to perform these tasks for them. It is therefore curious that Lysistrata, who seems to be a woman of means and standing, uses a domestic metaphor to explain her proposed solution to the city’s political problems. This would suggest that she believes co-operation and unity are achievable not by the rhetorical tricks of wealthy politicians, but rather by the sort of simple, methodical attention to detail practised by women of the lower classes.

Notably, despite what many who are perhaps rather more familiar with the synopsis than the actual play have been known to claim, the Lysistrata is not a ‘feminist’ play in any modern interpretation of the word; needless to say, one would be hard pushed to find an example of such a work in the fifth century BC, especially as part of the oeuvre of a conservative comedic playwright writing for a predominantly male audience. Lysistrata frequently upbraids her co-conspirators for being no better than the men, insofar as they too are slaves to pleasure and not sufficiently committed to peace. The women readily admit to this, and attempt to escape on such specious pretexts as going to spread fabrics out on a bed (a thinly-veiled metaphor for masturbation).

Nevertheless, the Lysistrata is certainly revolutionary in its depiction of women, as it shows them achieving a tangible political goal where men have failed. This stands out considerably from the depiction of women in fifth-century tragedy, which abounds with murderous family-destroyers (such as Medea and Klytaimestra) and pitiable, feeble wretches (such as Kassandra).

Aristophanes seems to suggest that the men are by this time too obsessed with warfare to make rational judgements about inter-state relations, and therefore entirely incapable of agreeing to make peace. Here, the female perspective becomes important: unlike men, women do not share in the glory of warfare, and do not feel the need to settle scores with old enemies by keeping their countries locked in battle; they do, however, have to bear the emotional burden of knowing that their sons and husbands might not come back from the war which had been blighting the Greek world for a generation. Aristophanes furnishes this as one of the primary reasons why women from both the Athenian and Spartan sides, as well as young and old women of varied social classes, are able to ignore the differences imposed upon them by the male-dominated political world, and to form an alliance to make the men listen.

The perpetual question hovering over the interpretations of the play is whether it is possible to discern whether or not Aristophanes was making a serious point about either women or warfare, or just aiming for cheap laughs from lewd jokes. For all their morality, Lysistrata and her band, despite winning various debates against the men, do not persuade them by words alone: rather, they produce a naked girl by the name of Diallage (‘reconciliation’) and ask the men to mark on her body the ‘territories’ they would like to conquer in order to make peace. The silent figure so captivates the men’s attention with her beauty that they are forced to submit to their passions and accede to Lysistrata’s demands.

Do the men, instead of giving in to the women’s point of view of the political situation, simply give in to temptation? Even so, it would be unfair to deny the women any agency in this exchange: Lysistrata clearly exploits the men’s sexual frustration most effectively and, in the end, achieves their capitulation. While not exactly uncompromising in the eyes of a modern reader, the women of Aristophanes’ Lysistrata are clever and shrewd; and while it can be debated whether theirs was a ‘sexual revolution’, together they certainly made themselves into a force to be reckoned with.