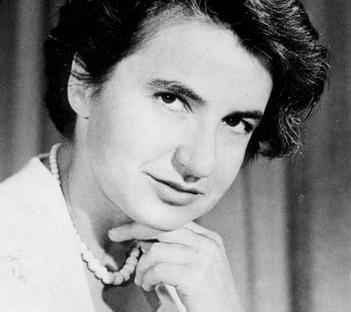 Rosalind Franklin was a British scientist who made one of the most important discoveries of the twentieth century. Her work on X-ray diffraction images of DNA is responsible for her fame after death but she is renowned for being unappreciated in life. She is now recognised for playing an important role in the discovery of the helical structure of DNA, though much controversy surrounds the individual contributions of the scientists involved.

Rosalind was born in 1920 into large, wealthy family. She started her education at St Paul’s Girls’ School before going to Newnham College, Cambridge. Despite completing her degree she could only be awarded a degree titular because women were not awarded degrees.

During the Second World War she worked at the British Coal Utilisation Research Association on the porosity of coal. Her work helped inspire high-strength carbon fibres and it was through research on coal that she developed the X-ray crystallography techniques that would be critical in her research on DNA. She began work at the Medical Research council’s Biophysics Unit at King’s College London in 1951 and was immediately promoted to working on DNA fibres as she was the only experienced X-ray diffraction researcher at King’s at the time. However, her appointment caused tension in the department as she took over from the work of Maurice Wilkins and Raymond Gosling. The failure of the unit’s director to inform Wilkins of the reassignment caused the rift that would always exist between Franklin and Wilkins.

The method of X-ray crystallography is a way of determining the arrangement of atoms in a crystal and the angles of the diffracted X rays are used to construct a 3D image of the densities of the electrons in the molecule. She first discovered there were two different crystal forms of DNA (A and B) and the reason why the images had previously been so unclear. She managed to separate the A and the B forms and hence make progress on discerning the structure of DNA. She discovered that the sugar-phosphate backbone lie on the outside of the molecule when previous models had thought it was on the inside. She also discovered that it was a double helix and not a triple helix as was previously thought. The only part she missed was how the bases paired on the inside of the helix. Her research was, however cut short when her unpublished data was informally communicated to Watson and Crick and were used in their model of DNA that was published in Nature in 1953.

Franklin never knew that Watson and Crick had got hold of her data and she moved on to make more challenging discoveries including the structure of the Tobacco Mosaic Virus.

The controversies surrounding her work and her contribution to the discovery of DNA were raised following her death from ovarian cancer in 1958. The fact that she continued to work during the course of her illness and her group published 13 papers whilst she was receiving treatment is testament to her dedication and extraordinary determination.

Watson and Crick went on to win the Nobel Prize but Franklin was not recognised because the prize cannot be awarded posthumously. There are many different opinions about how Franklin and her work were treated in during and after her lifetime. She did, however, work in an extremely male dominated field and there have been several accounts of her experiences of sexism.

Even though Rosalind Franklin’s work was not recognised in life she is now included in the chain of scientists whose discoveries led to the final model of the structure of DNA. It is clear that she was extremely dedicated and exuded the determination needed to succeed in a then male-dominated world of science.