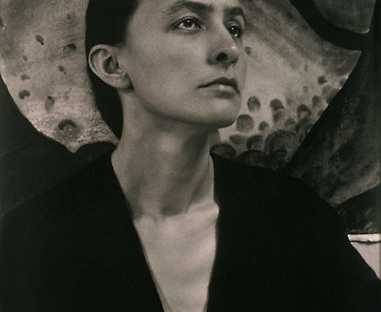 The closest that the American painter Georgia O’Keeffe and the English writer Virginia Woolf physically came was in the pages of the May 1925 volume of the modernist literary magazine, The Dial. Images of O’Keeffe’s twin works, The Flagpole, preface Woolf’s The Lives of the Obscure, an essay on the unexpected profundity and fascination invited by ordinary, uncelebrated lives. This editorial decision prompts recognition of the metaphysical proximity which supports the physical one: both Woolf’s humble characters and O’Keeffe’s focus on a generic house behind a towering flagpole attest the imaginative supremacy of the pedestrian.

These artists demonstrate early forms of our current aesthetic priorities. In a popular culture which delights in the rise of the averagely talented to celebrity status, while continuing to endorse a post-Romantic merit in originality, the names of Woolf and O’Keeffe have themselves receded into a cultural backwater. Woolf’s works are often dismissed as incomprehensible ‘feminist literature’ and O’Keeffe’s art derided, through excessive reproduction, as ‘calendar art’. Their real impact can perhaps only be considered in the context of the artistic era of which they were part, when the thrill of O’Keeffe’s flowers was not in their ability to please the eye, but in their unorthodox scaling, enlarged intensity and self-conscious transition from the sensual to the overtly sexual. Woolf and O’Keeffe shared the ability to elevate the ordinary to the extraordinary, be it in finding pictorial inspiration in the uninspired, or creating vivid prose out of the prosaic.

In the late 1920s, O’Keeffe moved away from New York to work in the deserts of New Mexico. She developed her fixation with flowers into her study of isolated bleached bones found in the broad, sandy landscape. The technique of linear free-flow which had characterised the flower paintings was employed on the rendering of vast cliffs and voluptuous hills, often with an apparently levitating, assertive animal skull in the foreground (see Ram’s Head White Hollyhock and Little Hills, 1935). O’Keeffe said of her skulls,

‘To me they are strangely more living than the animals walking around… The bones seem to cut sharply to the center of something that is keenly alive on the desert even tho’ it is vast and empty and untouchable’.

By foregrounding, telescoping and centralising a component of the surrounding whole, the New Mexico works express a markedly Woolfian ‘stare’ and exalted significance (for instance, the painter Lily Briscoe’s intense focus on the patterns of the tablecloth in To The Lighthouse, and Septimus Smith’s acute perception in Mrs Dalloway). Aldous Huxley’s 1954 essay The Doors of Perception is an important extension of this aesthetic of the ordinary, of transcendentalism through the urbane.

Whereas O’Keeffe wanted to flee from the over-saturation of civilisation, and have space in which to focus single-mindedly and single-sightedly, Woolf was a compulsive city enthusiast. Much of her work is set in London, from whose layers of civilisation she selected vivid, detailed strands on which to focus. For all this integrity and earnestness, however, and as with many writers stimulated by the variegated city canvas, Woolf’s work contains a residue of satire. Jacob’s Room (1922), the biographical portrait of an intensely unexciting individual, exercises satire of its literary form as well as its subject. Jacob and his tediously pretentious friends are shown in debate, quoting from the classics – attacked by their author for over-emphasising the canonised, the known, the ordinary: ‘Civilizations stood round them like flowers ready for the picking.’ Using flowers as signifiers, Woolf engages in an inversion of magnitude, by which natural, inanimate and commonplace objects displace the manmade, effervescent diversity usually associated with great civilisations.

O’Keeffe’s choice of the natural, inanimate and commonplace, signifies not civilisation, but rather the intimate intervals of respite which she has, in the concentration of her focus, carved from civilisation’s disharmonious form. The isolated rawness of eroticism and mortality emerge as the primary tenors of O’Keeffe’s funereal lilies, bleeding poppies, supine landscapes and despotic skulls. If flowers simultaneously represent life and death (once picked they are dying, yet in that liminal state between life and death they become imbued with cultural significance of rejuvenation and wellbeing), then a skull can transcend its identity as a referent of death as it comes to be regarded as a relic of the life it once housed. The object’s symbolism ends up being the reverse of its reality: just as there is no more candid memento mori than flowers, there is no evidence of life more empirical than the remains of a skull.

This interpretative duality is reflected in Mrs Ramsay’s transformative attitude towards the boar’s skull on the wall on the nursery in Woolf’s To The Lighthouse (1927). Cam is unable to perceive the ornamental beauty of a skull, seeing it instead with the literal eyes of a child as the remains of a dead pig’s head. Initially it is this realistic aspect which Mrs Ramsay uses to reassure Cam: ‘But think, Cam, it’s only an old pigÕ. However, upon realising that the child’s fear extends to the symbolic significance of the skull as a token of death, Mrs Ramsay resorts to a denial of the skull’s validity as an ornament by covering its features with her shawl and re-writing its identity in a soothing description of vitality.’It was like a bird’s nest; it was like a beautiful mountain such as she had seen abroad, with valleys and flowers and bells ringing and birds singing and little goats and antelopes…’By bringing the animal back to life in an idyll, Woolf re-inscribes intimations of mortality into a form of paradisal resurrection, offering a vision of immortality where a skull is transfigured into a nest, the semiotics of death merging once more with those of new life.

O’Keeffe’s Horse’s Skull with Pink Rose (1931), a transitional piece offering the flower and skull as dual subjects, contains a supreme element of ambiguity in its abstract backdrop: is the pale scroll-like shape a suggestion of the aridness and stark drama of the desert, or is it a page which O’Keeffe has filled with a language which shows rather than describes its subject? The ability of visual art to render the crevices of reality beyond the reach of language is a concession which Woolf makes in her essay The Cinema, wondering if there is ‘some secret language which we feel and see, but never speak.’