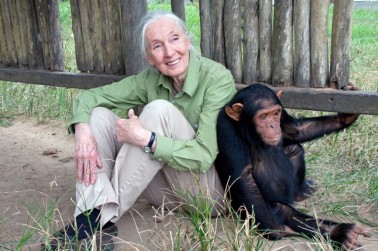 “Now we must redefine tool, redefine man, or accept chimpanzees as human.” This was the response of acclaimed palaeontologist Louis Leakey to Jane Goodall’s astonishing observation in 1960 of chimpanzees manufacturing tools, in the form of stems stripped of leaves, and using them to extract termites from nests. With this discovery, the adage ‘man the toolmaker’ as a watertight expression of humankind’s uniqueness was instantly punctured.

Chimpanzee tool manufacture was not the only one of Goodall’s discoveries to send shockwaves through the anthropological and zoological communities. Over decades spent studying the chimp community at Gombe, Tanzania, Goodall was the first to observe very unexpected behaviours, such as meat eating and warfare, as well as recognising that chimps have a complex social structure, form close bonds, experience emotions and have unique personalities. In doing so she utterly transformed our understanding of this previously little-studied species, and challenged long-held views on our own place in the natural world.

Goodall’s fascination with animals began early. As a child she once spent five hours cooped up inside a henhouse at her grandparents’ farm, watching the chickens. Outside, her family became worried and even called the police, but by the time she emerged the young Jane had fulfilled her objective: to discover how a chicken lays an egg. Goodall’s childhood was spent dreaming of travelling to Africa to study animals. By 1957, at the age of 23, several years of working as a secretary had allowed her to save up enough to travel from London to Kenya and join the expat community there.

From here, she introduced herself to the eminent paleoanthropologist Louis Leakey, who initially suggested she work as his secretary. However, he also had another project in mind. At this time, we knew extremely little about our chimpanzee cousins, and their behaviour in the wild was virtually completely unstudied. Leakey wanted to send a researcher to spend a few years closely studying the chimpanzee population in Gombe national park, Tanzania. Goodall leapt at the opportunity, despite the isolation and danger and despite the fact she had never been to university, though she would later return to England to complete a PhD in zoology at Cambridge, at Leakey’s insistence. In fact, her early lack of formal coaching in zoology proved in some ways to be a strength rather than a weakness.

Ethology- the science of animal behaviour- got started in earnest in the early 20th century. Partly in an attempt to be perceived as a serious science, ethology dealt strictly in observable behaviours, and treated animal minds as a ‘black box’, the inner workings of which could be safely ignored. A stimulus went in, according to this assumption, and like clockwork a response would follow. This systematic mode of study was known as behaviourism, and it was the dominant school of thought until the 1950s, when psychologists began to study the internal cognitive processes of human minds. However, the enduring influence of behaviourism meant that when Goodall came to Gombe it remained scientific heresy, wishy-washy anthropomorphism, to suggest that non-human animals had mental states and were capable of reflection and reasoning, or that their behaviour resulted from anything other than pure instinct.

Goodall’s position as a relative outsider of the academic community meant that she was unaware of the behaviourist framework that she was supposed to use to describe her study subjects. As she later wrote: “I didn’t realise that animals were not supposed to have personalities, or to think, or to feel emotions or pain. […] Not knowing, I freely made use of all these forbidden terms and concepts.” Rather than giving each chimp a number, as would have been standard, Goodall named them and, living in close contact with them, attempted to get to know each one as an individual. This was strongly reflected in her writings on the chimps, which are full of character and intrigue. As science writer Matt Ridley put it, “Goodall’s account of life among the chimps of Gombe reads like a soap opera about the Wars of the Roses written by Jane Austen.”

It’s easy to forget just how little was known about our primate relatives at the time Jane Goodall began her research, or how radically different our view of humankind’s place in the animal kingdom. Our species’ descent from an ancestor shared with the other great apes had not yet been confirmed using molecular evidence, and the exact evolutionary relationships between the different primate species were still a source of debate (we now know that chimpanzees and bonobos are our closest living cousins, more closely related to us than they are to gorillas and orangutans).

Historically, the tendency was to see monkeys and apes as comical, even grotesque, parodies of humankind; a view that was epitomised by the ‘chimps’ tea parties’ that were held as entertainment in zoos until the 1970s, where chimpanzees, sometimes dressed up in human clothes, would be served afternoon tea seated around a table. Two decades prior to the publication of On the Origin of Species, a young Charles Darwin was influenced by an orangutan named Jenny at London Zoo. Over several visits, he offered her food, toys, and a mirror and, noting down her behaviour, compared her often to a stubborn and playful human child. Upon seeing the same primate in 1842, Queen Victoria declared her to be “frightfully and painfully and disagreeably human”. There is a long history of early European explorers reporting sightings of mysterious, hairy, forest dwelling peoples, with strikingly human accompanying illustrations. Similarly, people living alongside the great apes sometimes had legends of these species as humans who fell from grace long ago; the name ‘orangutan’ is Malay for ‘man of the forest’.

Within the conception of non-human primates as a rung below humans, humankind was of course further stratified into a supposed hierarchy; with the white male at the pinnacle, people of different races occupying various lower positions, and women of all creeds and colours firmly below their respective men. Horribly, ‘human zoos’ were a popular fairground attraction in Victorian Britain, where visitors would gawk at people from different parts of the empire. In this context, the great apes’ similarity to humans was noted, but they were viewed almost as a ‘more savage savage’ rather than species parallel to our own. 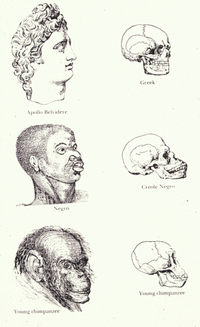 By the time of Goodall, chimpanzees, like all the great apes, remained something of an exotic mystery. Her revelations about chimpanzee tool use, sociality, violence and meat eating transformed our view of the species, and showed they have much more intelligence and complexity than they’d been credited with. In short, Goodall allowed them to be seen as a species in their own right rather than a draft version of humans. Chimpanzees have neither the fine motor control nor the inclination to use cutlery properly, making them a spectacle in zoo-organised tea parties, but it’s irrelevant and absurd to measure other animals exclusively by how well they perform human tasks, just as it would be to say that humans make terrible orangutans because we are less equipped to move about in the tree canopy.

These new discoveries have also informed our modern understanding of our own place in the animal kingdom. Studying these behaviours first described by Jane Goodall in the chimpanzees is a cornerstone of efforts to understand the evolution of our own species. Behaviours such as tool use and hunting, as well as complex social relationships and individual personalities, long thought to be unique to humans among the primates, are now known to have much more ancient origins. In the words of Matt Ridley, “Goodall’s anthropomorphism [drove] a stake through the heart of human exceptionalism”.

Now aged 83, Goodall is today considered the world’s foremost expert on chimpanzees, but she is best known as a figurehead of the conservation movement: in this role she has become enough of an icon to be parodied in The Simpsons as the avaricious Dr Joan Bushwell. Goodall’s intimate acquaintance with the Gombe chimps has led her in more recent decades to become a passionate advocate for the great apes, in the face of increasing threats from deforestation, poaching, and simian immunodeficiency virus, the chimpanzee equivalent of HIV. The Jane Goodall Institute, a nonprofit she founded in 1977, now works on every continent to promote wildlife conservation and sustainable development.

However, the wide recognition of Goodall’s conservation work can perhaps be contrasted with a lack of appreciation for her as an academic figure as opposed to a fringe, jungle-dwelling eccentric. Goodall’s seminal observations of our closest living relatives continue to have an extremely major influence on anthropology and zoology today. No discussion of animal behaviour, hominin evolution, or what it means to be human is complete without reference to her work. Jane Goodall’s paradigm-shifting discoveries warrant her a place as a significant shaper of modern day thought.

General source on our changing understanding of chimpanzees:

Review of culture in chimpanzees:

A perspective on human warfare that draws heavily on observations of chimpanzees:

Skull drawings: Illustration from ‘Indiginous Races of the Earth’ (1857)

1 thought on “Jane Goodall: A significant shaper of modern-day thought”