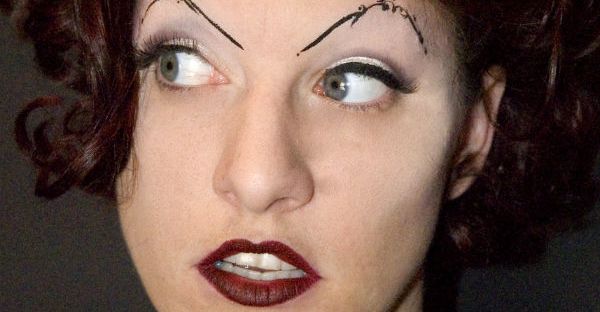 The 1990s, some might agree, were something of a golden age for feminist rock music – the emergence of the ‘riot grrl’ genre spear-headed by musicians such as Kathleen Hannah of Bikini Kill symbolised something of a perfect marriage between the anger and energy of punk and the D.I.Y. aesthetic of the grunge movement.  Sadly, as grunge became absorbed into the mainstream, the feminist spirit of the movement was undermined its sudden and undesired elevation to fashionable status. This brief interpretation of the rise and decline of 90s feminist music seeks to familiarise the reader of this piece with a legacy and at attitude, one inheritor of which is the subject of this piece, Bostonian musician and feminist icon Amanda Palmer.

Palmer is best known as former singer and pianist in self-defined ‘punk-cabaret’ duo The Dresden Dolls, but for the purposes of this article I shall focus on the era of her career following her split from the band and her pursuit of a solo career. The best way into Palmer’s world is to watch her music videos, alternately tongue-in-cheek and sinister, which are particularly striking for the challenge they make to gender roles and magazine stereotypes of attractiveness. In one video Palmer serenades band member Brian Viglione as her ‘coin-operated boy’, boasting of her ability to control him while at the same time portraying a clichéd traditional relationship in which gender roles place the female as passive to the male. The fact that the characters in this twisted representation of white-picket-fence domesticity are dressed in full theatrical make-up and cabaret costume locates Palmer’s vision in a world where gender roles are a kind of Brechtian role-playing. Palmer has never shaved her armpits but shaves her eyebrows.

Her first solo album ‘Who Killed Amanda Palmer’ has gained notoriety through several events subsequent to its release last year. Her relationship with Roadrunner, the record company which controlled the release of the album was continually soured by disagreements up until she was eventually dropped: a move which Palmer had begged for, notably by performing “Please Drop Me” – a protest song to the tender tune of “Moon River” – at a concert after hearing that members of the record company would be present.

Her disrespect for the company, and for the music industry as a whole, is in part due to Roadrunner’s decision to edit one of her music videos to remove certain shots in which her bare stomach was exposed because she looked ‘too fat’. On her website Palmer wrote shortly after the incident, “This was just nonsense. I thought I looked HOT. I really, really didn’t see where they were coming from. At all.” Her bitter condemnation of inherent sexism in the music industry inspired fans to post on the website pictures of their bare stomachs, often with messages written on them promoting body confidence. The “ReBellyon” as the movement became known, gained considerable media attention for Palmer: In an interview with The Guardian shortly after the incident Palmer states:

“There’s something advantageous about being a woman in rock versus, say, a woman in chemistry or construction… There’s definitely a built-in sexism across the board, but I think you’re afforded a degree of freedom in rock because, historically, the rules have been flexible. That makes it more of a shame when women feel they have to bend to pressure and fit the beauty standard, do a certain thing, have a certain kind of attitude. There’s even that terrible cliché of ‘the rock chick, the bad girl’, and it all belongs in the same evil box. You very rarely see a woman step outside the standard and make some rules from scratch.”

Roadrunner neglected to promote Palmer’s solo album, considering it to have “no commercial value”, despite its obvious link to the popular Dresden Dolls as well as Ben Folds who produced the album – furthermore, Palmer’s partner Neil Gaiman wrote a book of short stories to accompany the album’s release. In February of the following year the song ‘Oasis’, taken from the album was banned in the UK because it was considered “making light of rape, religion and abortion”. The song is lyrically controversial, being written from the point of view of a girl who is raped and has an abortion but, in Palmer’s words, “is so out to lunch that she’s in total denial of the gravity of her situation”. In response to the ban on the record’s release Palmer issued a statement in which she admits to having been date-raped and having had an abortion at 17: importantly, however, Palmer does use her personal experience to justify herself:

“I actually DON’T believe those experiences should lend me any credibility, any more so than I believe the director of “Life is Beautiful” had to have been an Auschwitz victim in order to direct that film.”

She regards the freedom to write, talk and sing about dark and controversial issues without fear of retribution as fundamental to creative growth; it is “the cornerstone of what keeps the world moving forward, not backwards, not standing still”. Interestingly any kind of feminist protest in the song is eclipsed entirely by the fact that the work has become a symbol of protest against the censorship of art. Indeed, as Palmer insists that her personal experience of abortion does not automatically make the song ironic, she is downplaying her feminine politics in order to make the point that art is genderless.

Palmer’s experience of sexism and censorship in the media has led to another kind of protest wherein the typical tools of advertising and corporate aid for promotion are rejected in favour of direct contact with her grassroots fan-base. Having previously been a street performer – several of her lyrics allude to her former career as a living statue – Palmer often busks to the queue outside her own concerts, subverting the idea of the audience as fourth-wall and the fallacy that the artist is untouchable. Rarely does one of Palmer’s shows go by without including some kind of performance protest: one notable example was in the aftermath of the vote on ‘Proposition 8’ when Palmer conducted a mock wedding to a horrified Katy Perry lookalike onstage, in front of a make-shift banner reading “Fuck Prop 8”. She writes on her website, “I trust the fan-base more than I trust the radio and certainly more than I trust the label” yet, conscious of her own notoriety, she is the first to mock the cliché of the punk-rock protester: “I’d rather put my future in their hands than in the hands of the machine… and so onwards.”